Exhibition at a Glance: Art, Territory, and Identity

Art, Territory, and Identity offers a sampling of visually arresting books and materials held by the Anne & Jerome Fisher Fine Arts Library that delve within the intersection of art, activism, and the exploration of identity in Latin America

The exhibit offers a glimpse into the subversive, critical, and interrogative works created by artists and writers from the Caribbean, Central and South America. Although what constitutes Latin America remains fraught, this exhibit displays material from and about places in the Americas formerly colonized by Spain, Portugal, and France, whose languages are derived from Latin. These vast and diverse regions are palimpsest of different colonial histories, heritages, languages, ethnic and racial compositions, landscapes, and political traditions.

Art, Territory, and Identity is not encyclopedic – Fisher’s collection is by no means comprehensive, especially when it comes to Latin America – rather, the exhibit highlights through its inclusions (and omissions) the countries and peoples represented in our collections. Combining traditional print texts amassed over more than a century with new digital resources and objects from our Materials Library, the exhibit draws from the array of materials Fisher offers its community. While books as a medium are important and serve to document and memorialize movements, ideas, individuals and collectives, the exhibit also invites patrons to view dyes and textiles from our Materials Library, and to scan QR codes providing access to additional virtual information on the subject matter exhibited. Libraries provide access to information in all forms and help preserve cultural heritage in a variety of mediums, and we wanted to reflect that in the exhibit.

The diversity of works displayed affirm Latin America’s heterogeneous and rich art historical traditions. The exhibit is organized into porous thematic units, in part because of space constraints but also because artists in the region did not produce in a vacuum. Each section is named after one of the books in our collection. The items in the locked cases contain books from our rare book collections. The oldest being a Spanish catalog from The Centennial International Exhibition of 1876, the first official World’s Fair in the United States, and the newest being a feminist poetry zines printed at a small independent Puerto Rican press in 2018.

We ask patrons to use this link to recommend books, zines, and other materials related to Latin America arts and artists in the hopes of enriching our collection and stewarding this valuable cultural output. Many of the items on display are in circulation; we encourage patrons to borrow them once the exhibit ends.

Below are images from the exhibit and the texts that accompany each section. 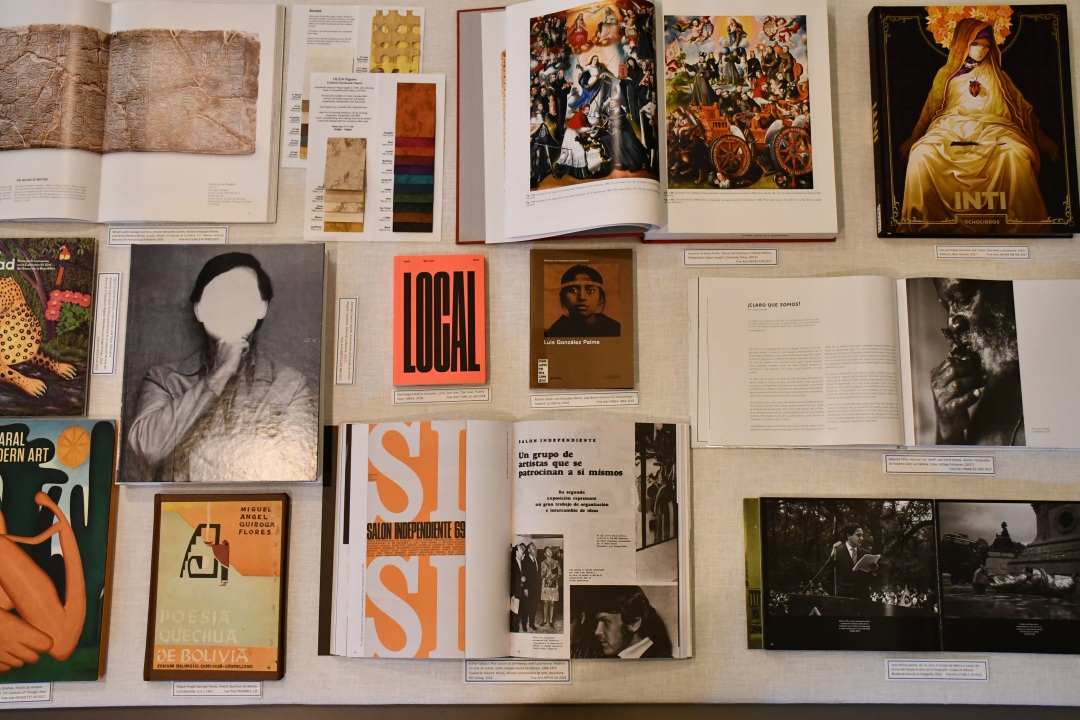 Who is Latin America?

The dual legacies of colonialism and Neo-imperialism loom large in Latin American histories, leaving artists and authors to wrestle with their weight.

This section consists both of works and objects, which either capture national identities in a straightforward manner or satirize and confront the forces of history, memory, genetics, religion, and the traumas that shaped the region. A central theme is the cultural impact of Catholicism and the evangelization of indigenous populations, which was an essential aspect of European conquest. Concurrently, the emergence of syncretic religions such as Santería and Vodou powerfully depict local forms of re-appropriation and resistance to colonial instruments of coercion and control.

Juxtaposed in this way, this section challenges misnomers about a singular Latin American identity, and rather suggest that all identities are simultaneously fluid and situational; they can be choreographed to meet agendas and co-opted as an oppressive force to erase and suppress others. These materials present the complexities of local identities and who can claim the right to represent them.

Identity is only partly determined by citizenship and residence, and is often threatened by imposed boundaries. Citizenship and nationhood depend power; the power to determine boundaries and who has the right to belong within them. The books in this section explore how issues of power play out in the fields of arts, design, and in the regions’ landscapes, and touch on the concept of home. These works address how issues of sovereignty, migration, race, ethnicity, and borders give rise to anxieties of authenticity and originality. Books on art by diasporic artists present the melancholic construction of histories and, for artists like Eduard Duval-Carrié and Tania Bruguera, the ability to talk back to power in a way that those in their homelands cannot. These artists remind us that the terms of citizenship have always been sites of contest, and tend to shift over time.

If the geographic boundaries of the nation-state are permeable, and its citizenship fluid, then landscapes offer sites for self-actualization. Seen here, landscapes are depicted by those who live in them, offering a range of natural, urban, real and imagined spaces. The landscapes, such as those presented by Ciudadmultiplecity: Arte>Panama; Scapegoat: Architecture, Landscape, Political Economy Issue 6; and Subtropical Dry, become vehicles from which to contend with forces that have the power to dislocate and upend the lives of people who inhabit romanticized and commoditized “paradise.” Yet have limited access to the wealth produced in them. 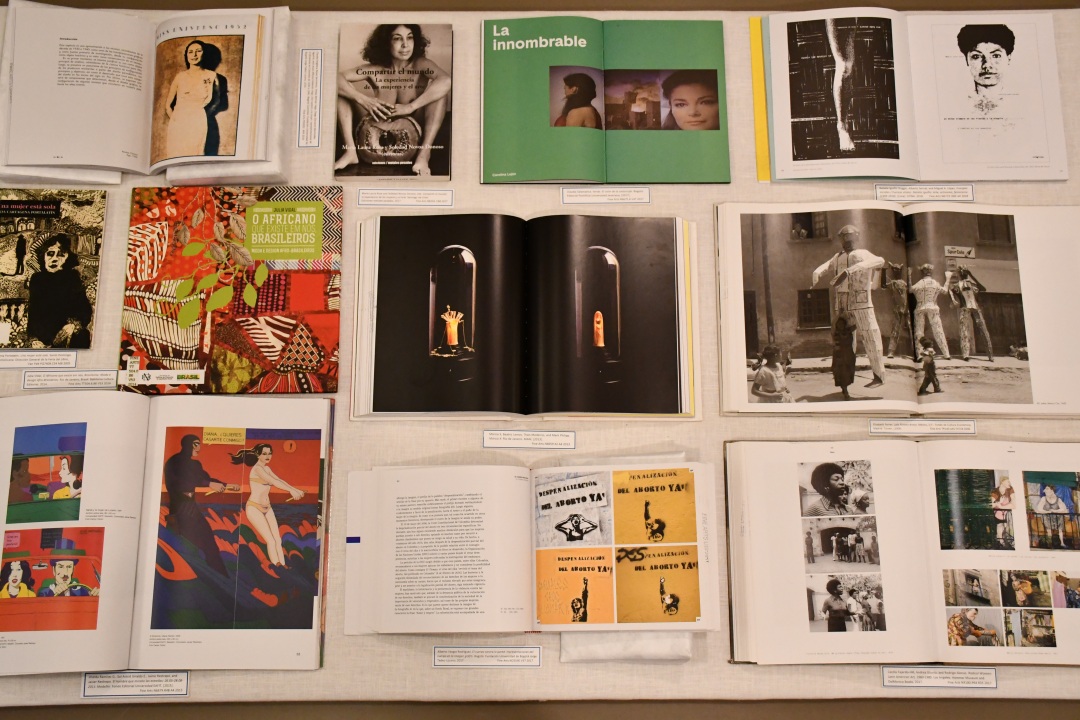 It is still an ongoing task to recognize the contributions of female artists to the art historical record of Latin America. The books in this section present and analyze works by women artists that interrogate gender, racial, and national identity. The relationship between body and violence is central. Gender has long been central to the operation of state power, particularly through the political exclusion of women and refusal to provide basic rights. Various works depict Latin American women’s commitment to revolutionary struggles, including those by artists in authoritarian regimes where gender hierarchies were further aggravated.

Some of the works, such as Natalia Igüiñiz’s posters depicting slain activist María Elena Moyano Delgado, denounce crimes committed against women during internal conflicts and lay bare the search for justice. Other works, such as that by Marcia X, humorously appropriate religious iconography and popular images to expose stereotypes and critique a society that raises women under principles of docility and submission. Others, like Victoria Santa Cruz whose poetry can be accessed via QR code, seek to give agency to marginalized and disenfranchised groups through powerful and exacting commentary. The works of these artists are as diverse as the female experience. However, displayed together the pages and book covers offer a window into how Latin American women explore and seize control of narratives that challenge ideas of beauty, provide critiques of reductive concepts of womanhood, and claim a space of critical self-expression. 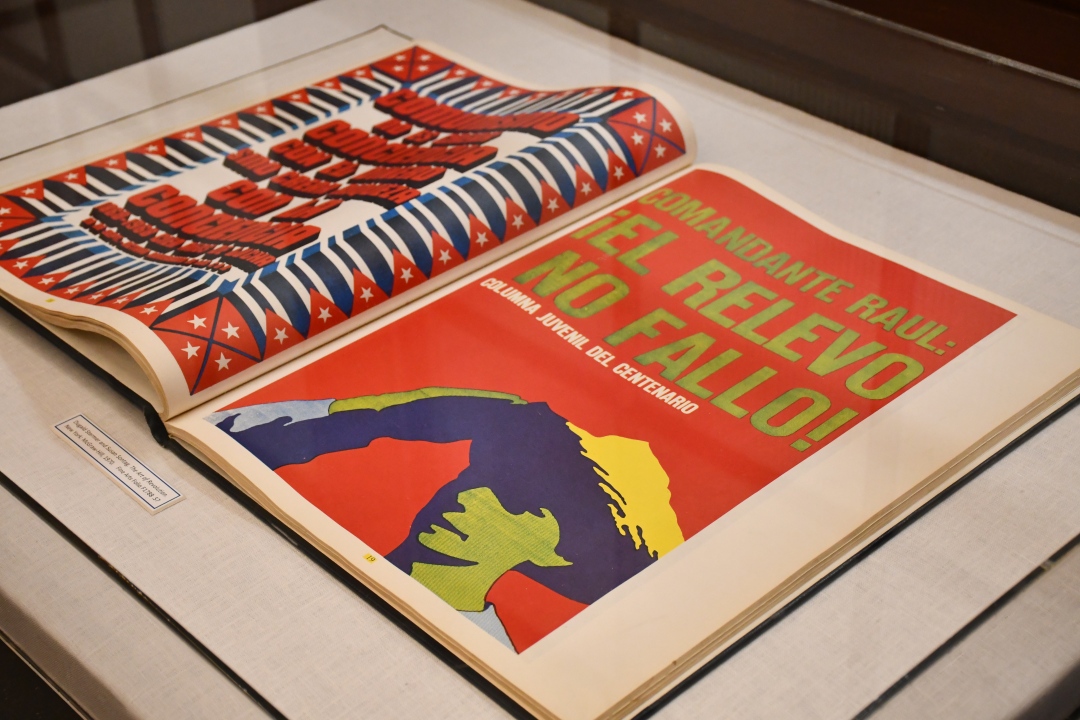 Authoritative regimes in Latin America employed extreme measures to control language: repressive tactics that targeted written and spoken words, and the bodies that expressed them. Throughout the region, artists created indirect ways of addressing, countering, and recording the harsh political realities that they were experiencing. This section contains books that uphold the power of the word in the face of violence and oppression, and memorialize the artists and collectives who used them against authoritative regimes throughout Latin America. Artists became a powerful force of resistance that stood against sanctioned methods of instilling fear and documented events that official memory institutions intentionally omitted.

La imagen sin límites: Exposición antológica de fotografía cubana hints at the power of photography, a weapon charged with rendering people and events visible or invisible. Photos from Arquivo ex machina: Identidade e conflito na América Latina, found in the rare book case opposite of this one, reaffirms the mediums (de)legitimizing power. Books such as Del Arte en Cuba: Esculturas and Adios Utopia: Art in Cuba since 1950 explore the role of governments in the creation of national memory through the construction of public artworks, such as monuments, and the fine line between asserting national autonomy and propaganda. The materials displayed in this section are juxtaposed with the polemic Para leer el pato Donald: Comunicación de masa y colonialismo and artworks inspired by the text. They serve as example of regional works that critique and interrogate political interference by outside forces, such as the Good Neighbor policy and the Operación Condor, a United States-backed campaign of political repression that instituted right-wing dictatorships in the Southern Cone. Works that for some authors and artists, came at the expense of the liberty to remain in their homeland.

The exhibit could not ignore the importance of media.

Two works were displayed via a projector: a social media image distributed by Puerto Ricans during the #RickyRenuncia movement and El que no sufre, no vive by Carlos Castro, a video also depicted in the exhibited book Borrado#1 o la perpetuidad del Voto Nacional.

After enduring more than a decade of widespread unemployment, a crippling debt, a fiscal crisis, severe austerity measures, and a devastating response to Hurricane Maria, Puerto Ricans took to the streets. On July 13, 2019, a group chat administered by Governor Ricardo Roselló was leaked that confirmed suspicions of an out-of-touch political class that resented its own people and was busy lining its own pockets while its citizens suffered. Governor Ricardo Rosselló and 11 close allies ridiculed friends and foes, planned dirty political tactics, mocked those who died in the aftermath of Maria, and engaged in other derogatory behavior in a leaked Telegram chat published as six top government officials were indicted. Puerto Ricans began protesting on July 15, using social media to assemble every day until the governor resigned. Protests included hundreds of thousands marching in a major highway, banging pots and pans every night at 8:00pm, kayaking in mass around the Governor’s residency, motorcycle brigades, and even reading bedtime stories to the Puerto Rican Constitution after incidents of police abuse. When Roselló fled the public eye, Puerto Ricans began posting a simple “Ricky Renuncia” image and tagging the governor, flooding his social media pages with the people’s demand. The protests were organized anonymously by the masses, using prints, cartoons, and memes to spread their message. “Tuitazos,” or tweetstorms, were mobilized to draw international attention to the revolt. Including #RickyRenuncia as part of the exhibit stands as a testament to the power of convocation and visual imagery, and the importance of preserving these digital manifestations to tell the story of those who made history.

The title of El que no sufre, no vive by Carlos Castro is taken from a popular refrain that proclaims pain and suffering as formative life experiences. He/she that does not suffer, has not lived. According to the text provided by Borrado#1 o la perpetuidad del Voto Nacional, such a negative perspective can only be uttered by a society that sees misfortune as an ineluctable part of life. Life worth is not garned by knowledge or experiece, but by pain. The artist uses the title for this videowork which depicts a statue of Simón Bolivar slowly eaten away by pigeons in the heart of Colombia.  Castro puts in doubt official discourse and casts a critical look at patriotic icons, which can be replaced as easily as the stories Nations tell themselves about their identity. Stories that only serve a purpose as long as they’re symbols of union and agreement. Castro casts the pidgeons as a poweful multitude who prove to be mightier than the man who is beholden as a grand symbol of Latin American political power.

View all posts by Coral Salomón

Welcome to the Penn TRL Blog!

Penn TRL is written by the Teaching, Research, and Learning staff of the Penn Libraries.

To learn more about the Penn Libraries, please visit our website.